Reading around the subject (notes in the margin)

While the volumes of Then There Were Mines are quite detailed, there is an awful lot of information that had to be omitted. When I started research for the work there was extraordinarily little information available on the internet. Over the six years that it has taken me to get this far, more and more information has become available, as Spain throws off the yoke of the Pact of Forgetting and starts to take an interest in its relatively recent past.

Academics are now writing and publishing doctoral theses on the development of mining in Andalucia and neighbouring Murcia. Social historians are commenting on the laws which governed the working lives of the miners and documenting the rise of Socialism in the early 20th Century. In addition, articles originally published in the various local mining gazettes between 1890 and 1910 have been posted on the web. Written by well heeled, educated men, these contemporary accounts vividly describe life and times in the Sierra Almagrera and Las Herrerías.

These, along with several other items which don’t quite fit into the main narrative, have been gathered into this Some Sidelines section. As with the main volumes, these can be download individually, or as a whole book.

Córcholis Takes to the Tracks

A young man, Señor Córcholis, also visited el Arteal. The last part of his journey there was on Luis Siret’s railway. This charmingly boyish account of his ride paints a vivid picture of the surrounding countryside and of the line itself. Join him on his journey in Córcholis Takes to the Tracks.

View or download Córcholis Takes to the Tracks PDF.

Other items which don’t quite fit into the main narrative.

There is another contemporary account of working life that I am translating which describes an hilarious visit by two Englishmen, who have an unfortunate experience in a mine shaft.

I am gathering more information about the seaboard side of ore transportation, in particular the loading operation in Cala de las Picotas. The original aero-cable terminal of the Los Tres Pacos mine near Cuevas apparently was extensively remodelled in later years. 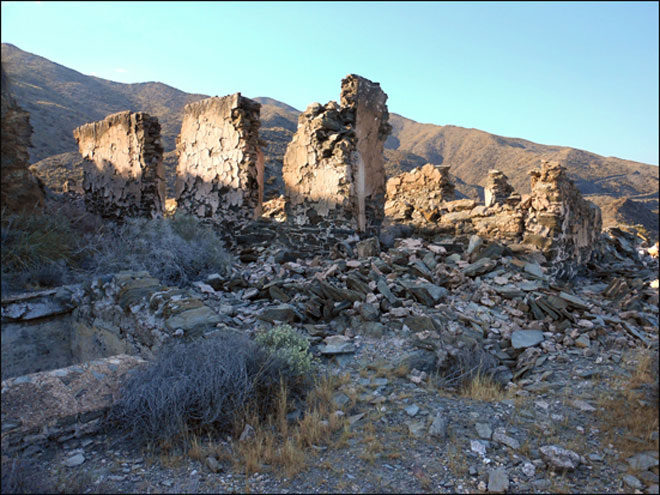 These mechanized loading systems put the hundreds of men, who used to ferry ore to the waiting steam ships, out of work. These men were a breed apart, described by a contemporary writer as being like savages. They also deserve to be given a new lease of life, if not least because they stood up against the abuse practices that were the norm for other workers. Something else which I need to follow up on is the ore dressing operation of the mine La Guzmana. In typical 'Men from Bilbao' style, this was a very up to date mechanized affair.

In the meantime, to help you to navigate the Sierra Almagrera, there is the plan of the mining concessions for you to download if you so wish. 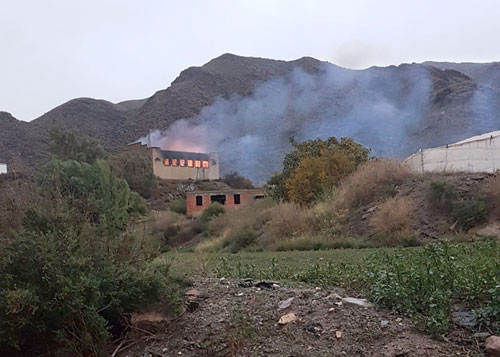 The sorry saga of the desagües, or dewatering plants, is rapidly drawing to a close, as dereliction and decay take their toll on the remaining buildings. This nowhere more evident than at El Arteal which is now under siege from fire, flood, infill and demolition.

Fire in the Transformer building, repeated flooding of the married miners’ quarters, the infilling of the sedimentation tanks, and the demolition of the last standing wall of the 1908 boiler room, makes one wonder what is next. The beautiful building housing Pozo Encarnación perhaps? What can be done to save this important heritage site? Listing it as ‘Patrimonio’ doesn’t seem to offer it any protection.
View or download El Arteal Under Siege PDF. 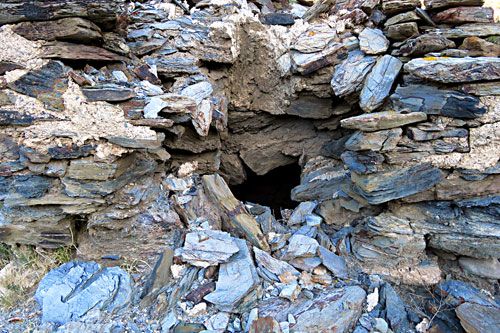 This was a much more cheering discovery. Visiting the remains of a wonderful horse whim, far more impressive than that of the Jaroso’s Carmen was a memorable morning. Hidden away in a remote and rather inaccessible corner, the site, which was probably abandoned quite early on in the Sierra’s Silver Rush, was relatively intact.

Metal artefacts were found, including part of a mule’s bridle, probably made in the forge on the site. Also on the site was something which has, as far as I know, not been found anywhere else in the Sierra.
View or download the Better Baritel PDF.

On a whim is a closer look at mule powered machines, the Mequines and Maragatos, the gins and whims, that were such a feature of the Sierra Almagrera in the 19th Century and possibly, beyond.

Once commonplace, apart from the ruins of two gin gangs, they seem to have disappeared, leaving no trace on the rocky ground.
View or download On A Whim PDF.